Horse welfare charity, HorseWorld have launched a campaign to end the cruel practice of tethering a horse for long periods of time. The Bristol-based rescue charity are often called by members of the public who are shocked, surprised and angered to see horses tethered by their necks using chains connected to metal stakes in the ground and left in unsuitable and dangerous locations. It is estimated that as many as 3,500 horses are tethered across the UK at any one time. 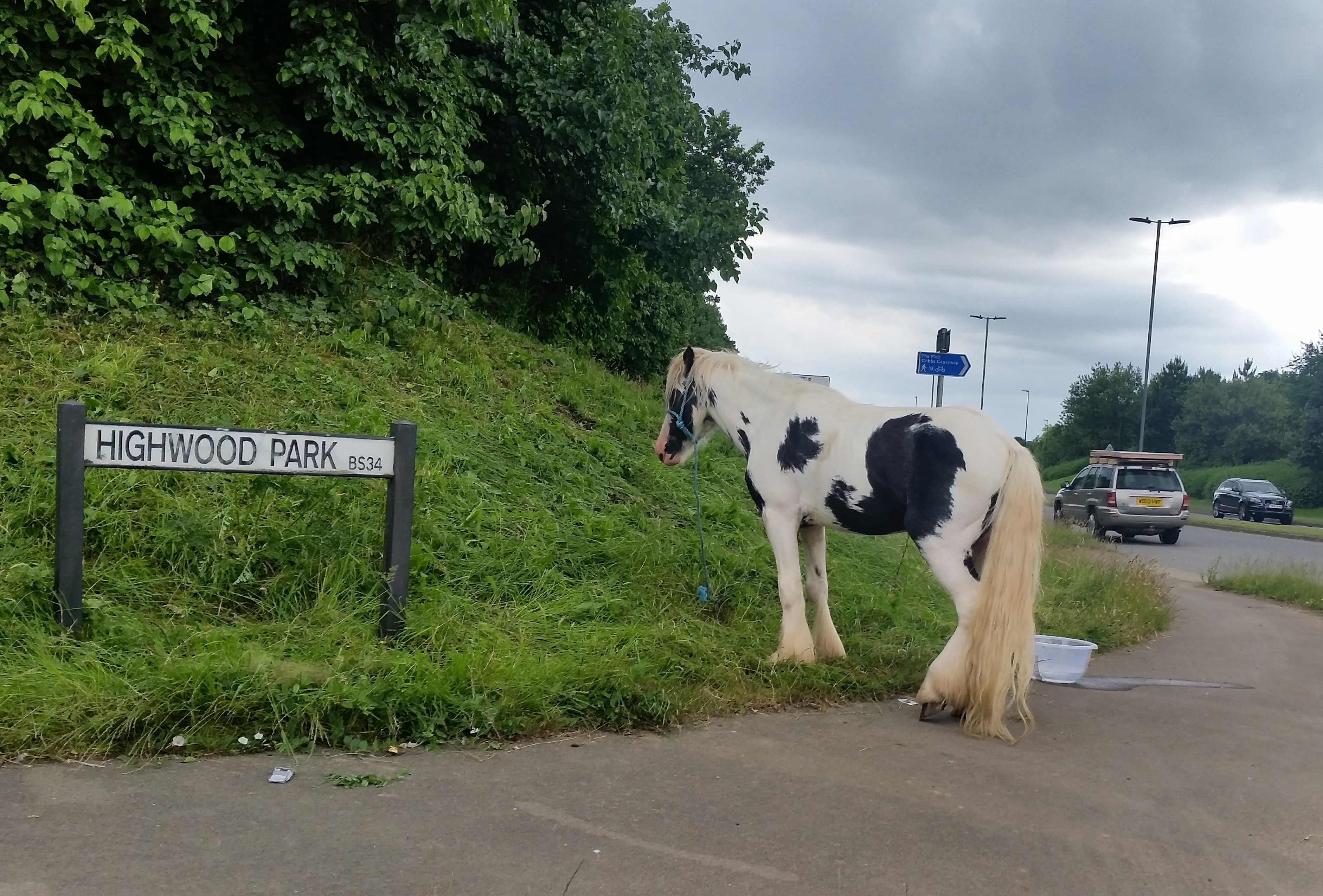 Horses are often left tethered on grass verges next to busy roads where they pose a danger to themselves, motorists and members of the public. As tethering is currently legal, the charity is powerless to help the poor animals left in these conditions and are launching a campaign to change that.

HorseWorld’s Managing Director, Mark Owen commented “Some owners are able to leave their animals tied up long-term on the sides of roads, on wasteland or even busy roundabouts in miserable conditions without any fear of repercussion simply because the laws relating to tethering are too vague and open to interpretation.

“These horses can be seen out in all weather conditions with no shade or shelter. If tethered to or near a tree, the horse can become entangled and injure itself. If tethered in open ground, it has no way of avoiding the heat from the sun, wind, rain or flies. Any grazing a tethered horse has access to will quickly become churned up and contaminated with droppings as the horse cannot walk more than a few metres (its wild relatives will cover many miles in a day to forage). Many are left with no water and if they do have a bucket, the chain or rope they are tethered with quickly gets caught around it and pulls it over leaving them with nothing.

“Horses are herd animals, they need social interaction with other horses. Tethering denies the horse the freedom to behave naturally and it is very cruel to keep them in solitary confinement. A horse’s instinct is that they are not safe on their own. Whilst chained to the ground, a frightened horse is denied the ability to run, the most basic instinct of a prey animal. Whilst tethering is not illegal, it is not recommended as a viable way to keep a horse and is not considered to be good practice. A tethered horse is unable to run, graze and be free to act and live as a horse naturally should. The long-term psychological effect of being restrained and isolated in this way day after day must be torture.” 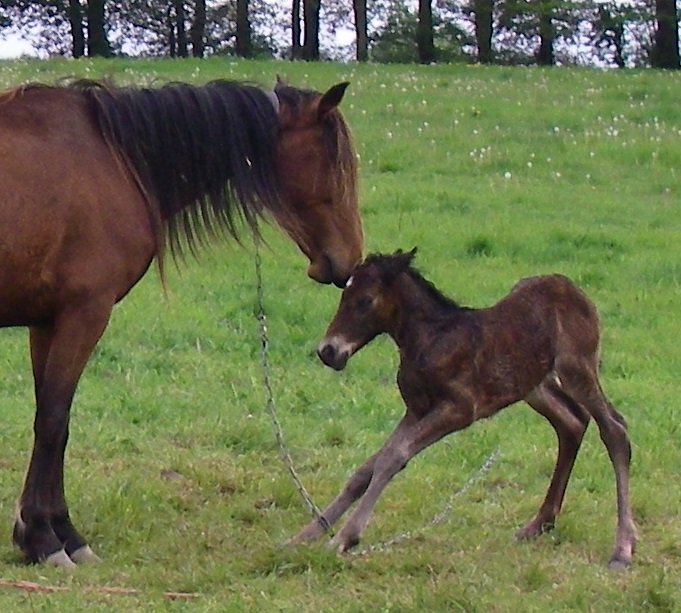 In May 2015, HorseWorld rescued a mare who had been forced to go through the pain and discomfort of giving birth whilst being restrained by a chain which prevented her from moving around freely and frequently entangled her legs. She was also left without shelter or water for long periods of time and was trapped in the field with a stallion who had tried to attack her foal. She was restrained from protecting her own baby and was very distressed. 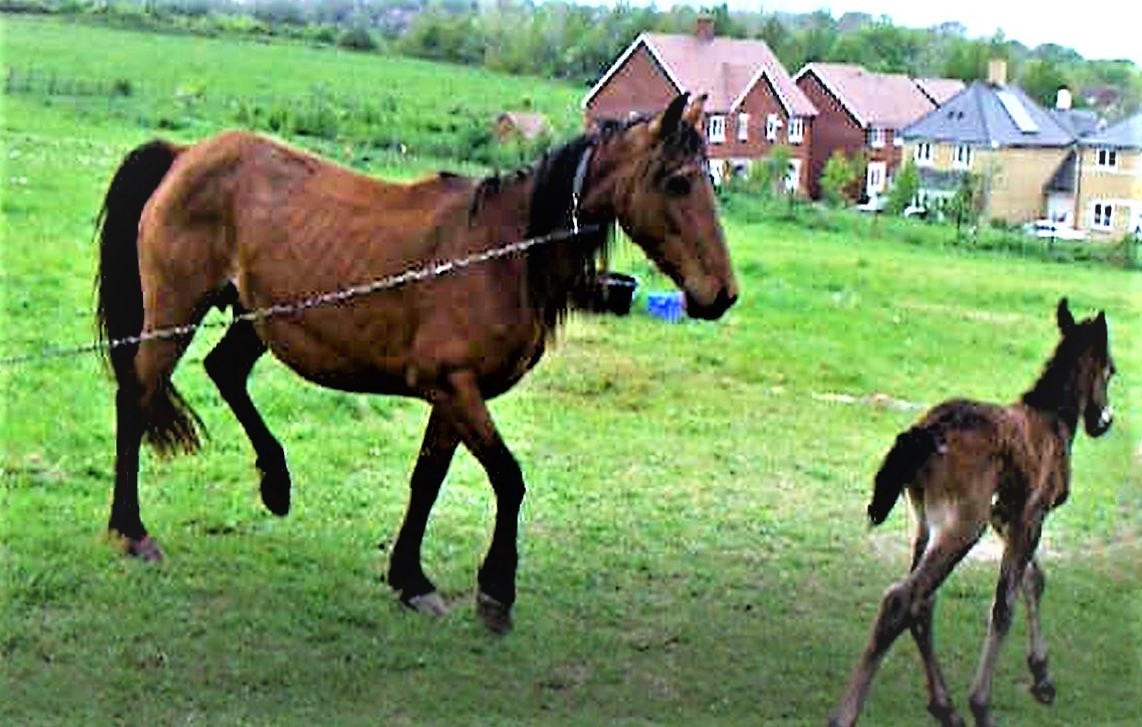 The mare and foal could be seized under the animal welfare act as the mare was showing signs of long-term neglect and the foal was in immediate danger of being injured. They were brought back to HorseWorld to begin their rehabilitation.

The mare was named Catena meaning ‘chain’ in Latin and the foal was named ‘Salisbury’ which is the location they were found. Catena’s hooves were very overgrown and split. Her hinds had shoes on and her front feet still had clenches (nails) in where the shoes had been pulled off as the hooves grew. They were only able to be legally seized because of this neglect, not because Catena was tethered.

HorseWorld believe that long-term tethering is a restriction on the natural liberties of animals and it should be made illegal to tether horses long-term. The charity are launching a campaign to change the law called ‘Break the Chain’.

#BreakTheChain campaign is launching at the Horse of the Year Show (HOYS) on 5th October. The aim of the campaign is to change the law so it restricts the legal amount of time a horse, pony or donkey can be tethered to, at most, 24-hours. The campaign would also see a complete ban on tethering animals in unsafe locations such as roadsides, roundabouts and other public land that may pose a risk to both animal and the public and also enforce a policy which states: ‘if your only recourse for keeping a horse is tethering, you should not be permitted to own that animal’

For more information about this campaign, you can visit the website www.BreakTheChain.org.uk

In the link above, you can send the following email to your MP (The website will automatically select the MP for your area using your postcode).

I have recently learned that as many as 3,500 horses are tethered across the UK at any one time. I have also learned that, despite some guidelines, a majority of these animals are tethered in unsuitable conditions with severe and often cruel restrictions of their natural freedoms. Moreover, these animals are often tethered in locations that put them and the public at risk, such as roundabouts or by busy roads.

The Government has committed to protecting the fundamental welfare of all animals with the Animal Welfare Act of 2006.
Section 9 of the Animal Welfare Act places a duty of care on the public to ensure they take reasonable steps, in all circumstances, to meet the welfare needs of their animals to the extent required by good practice.

I and many others believe that long-term tethering is a restriction on the natural liberties of animals and it should be made illegal to tether horses, donkeys, ponies and their hybrids for more than 24-hours.

Tethering often infringes on the animal’s need for a suitable environment, the need to be able to socialise with other horses and it can often cause pain, suffering and psychological damage. In every case where a horse is tethered for an extended period of time it can seriously inhibit the horse’s need to exhibit its normal behaviour; in short, to run, graze and be free to act and live as a horse naturally should.

This sentiment is not only supported by concerned individuals; in the ‘Code of Practice for the Welfare of Horses, Ponies, Donkeys and Their Hybrids’ (December 2017), published by the Department for Environment and Rural Affairs, it states that ‘tethering is not a suitable method of long-term management of an animal’ (Annex 1: Tethering, p.32).

Where this Code of Practice does indeed provide guidelines and some recourse for those building a case against poor treatment of horses, it does not draw a clear legal line under what treatment is unacceptable.

I expect you find the cruel treatment of horses as upsetting as I do, but by not having more precise regulations around the practice we are allowing this cruelty to continue all over the UK.

As my MP, I ask you to use your position to:
Write to the Secretary of State for Environment, Food and Rural Affairs to urge him (The Rt Hon Michael Gove MP) to follow up on the values written in his department’s report and implement a law change that restricts the legal amount of time a horse can be tethered to, at most, 24-hours.Urge him to put a complete ban on tethering animals in unsafe locations such as roadsides, roundabouts and other public land that may pose a risk to both animal and the public.Enforce a policy which states: ‘if your only recourse for keeping a horse is tethering, you should not be permitted to own that animal’.It is time the UK took a firm stance against the unnecessary neglect and abuse horses face at the hands of unfit owners.

I hope I can count on your support on this vital issue and I look forward to receiving your response.
Thank you for your time.

Visit www.BreakTheChain.org.uk to find out how to send the above email to your MP 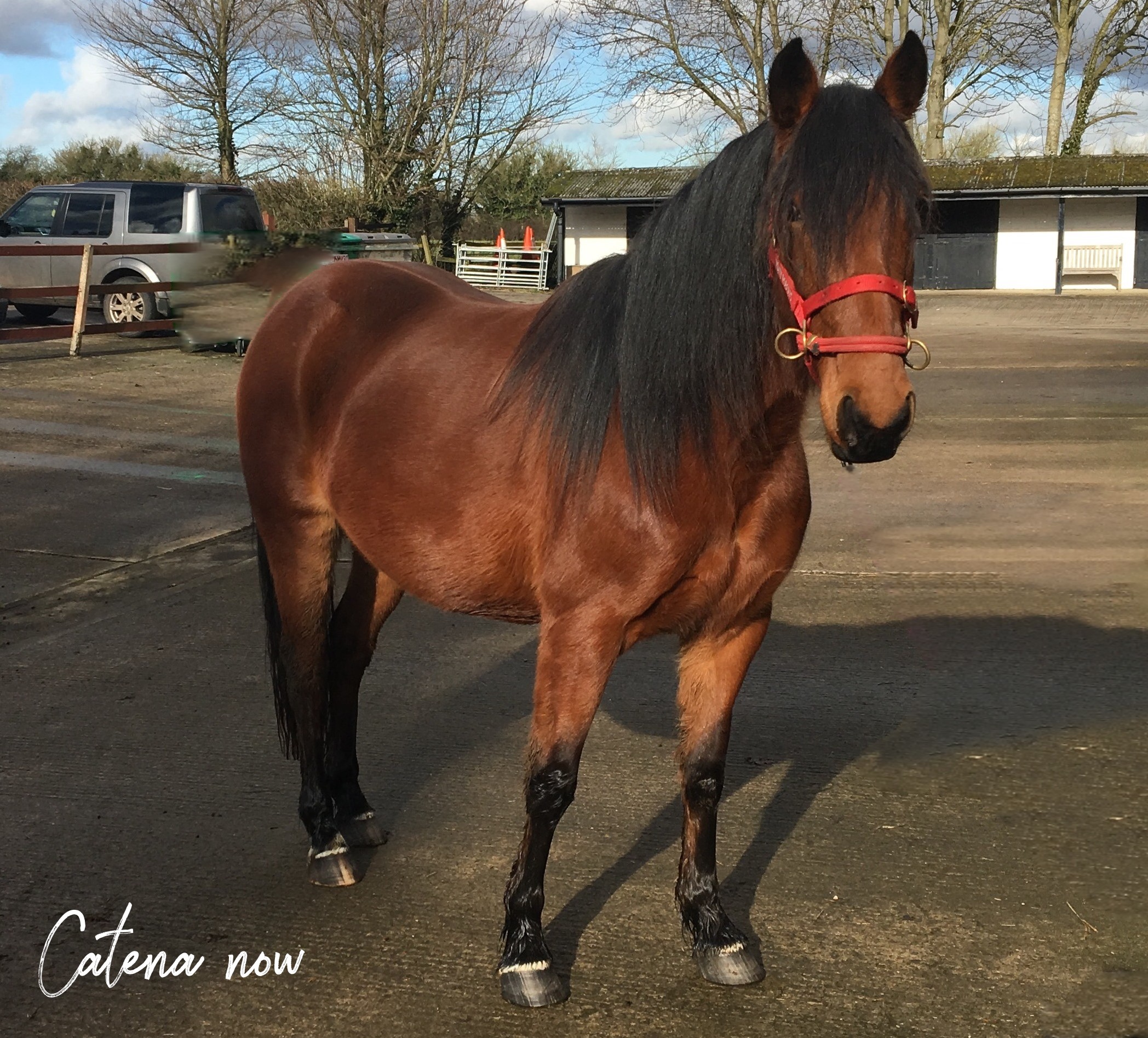 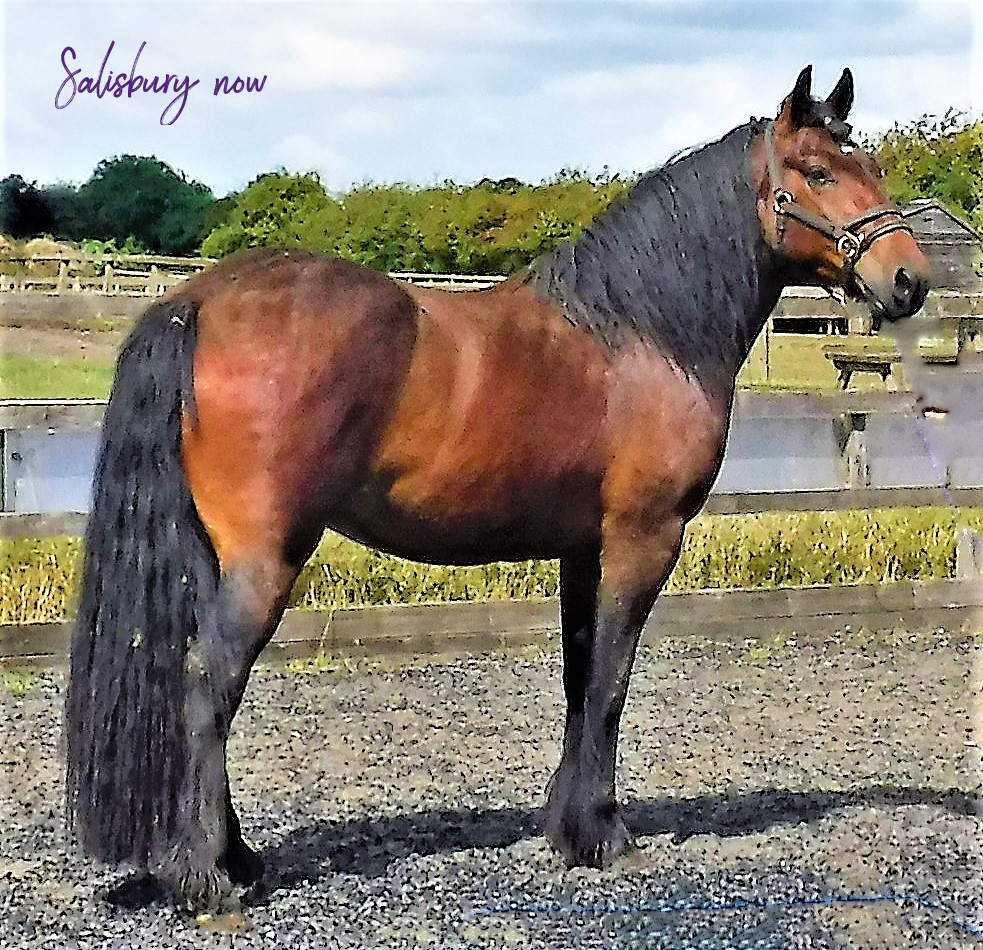