Horse rescued with horrific injuries caused by his own rug 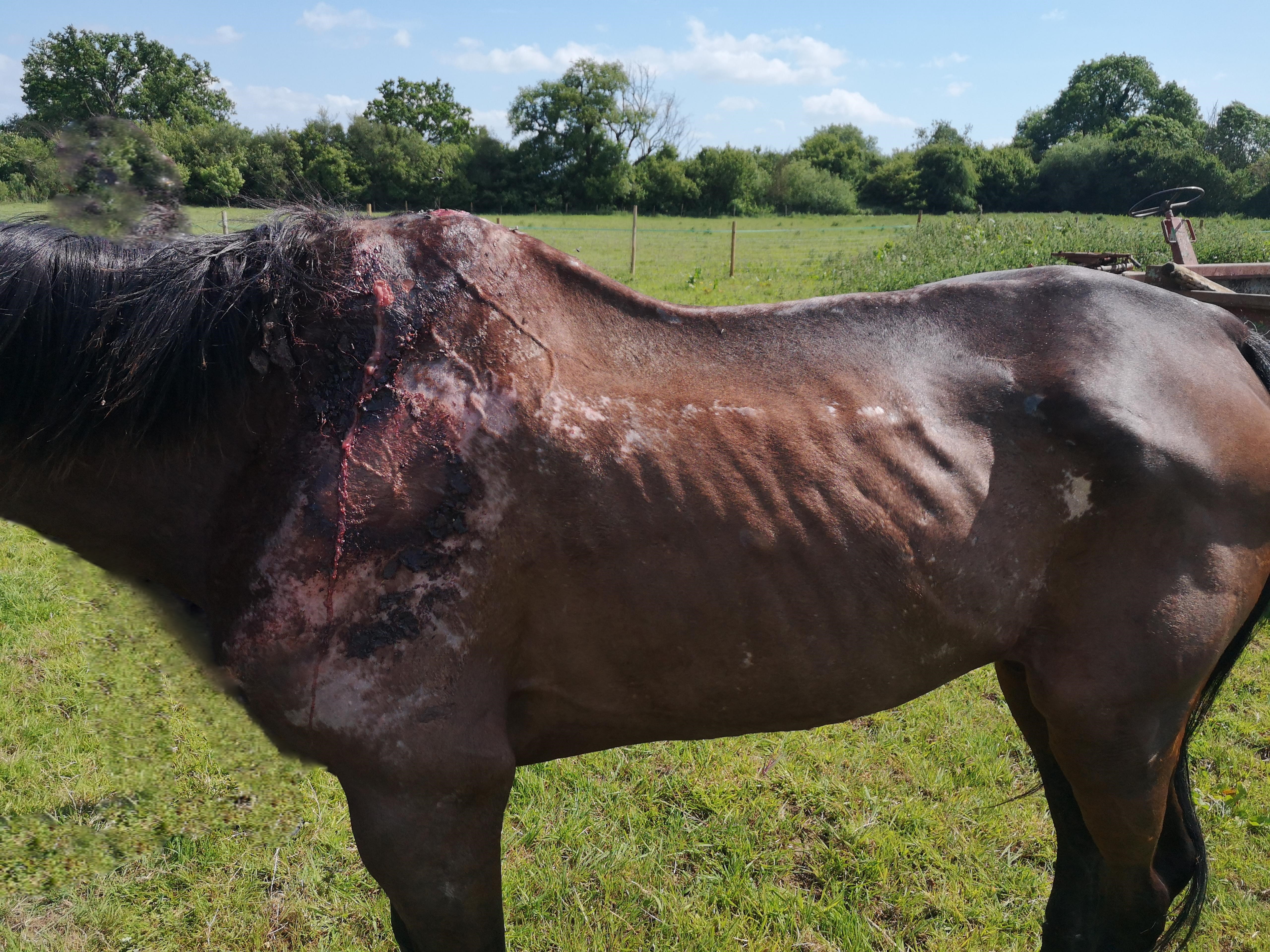 At the beginning of June, horse rescue charity, HorseWorld were alerted to the plight of a gelding who had been discovered with horrific wounds over his withers. His condition was thought to have been caused by a rug which had not been removed or checked for many months. The 20+ year old gelding was emaciated and had clearly been neglected for quite some time. Accompanying him were a mare and a colt (not thought to be related) who were in better condition but had not had any routine care such as hoof trimming for a long time.

The person thought to be the owner claimed to have signed the horses over to someone else and denied responsibility for them. However, because it was not possible to trace that person, the horses were classified as 'abandoned' and their removal from the site was authorised by the police.

The gelding known as Syd was removed from the site immediately by the RSPCA and received urgent veterinary care. He was placed with a foster carer while the removal of the other two horses was organised. HorseWorld collected the mare and colt and Syd was then transported to HorseWorld to join them.

“The wounds caused by the rug had developed into deep, infected sores. Our main concern was that the infection may have spread into the bone.” Said Equine Welfare Manager, Sarah Hollister. “If it has, his prognosis could be poor. The thick winter rug must have been left on for many months, including through the extreme heat we recently experienced which would have cause Sid immense discomfort. With the open sores on his withers, every step he took would have caused the rug to move across his open, infected wounds. He’s clearly been in a lot of pain for a long time.” 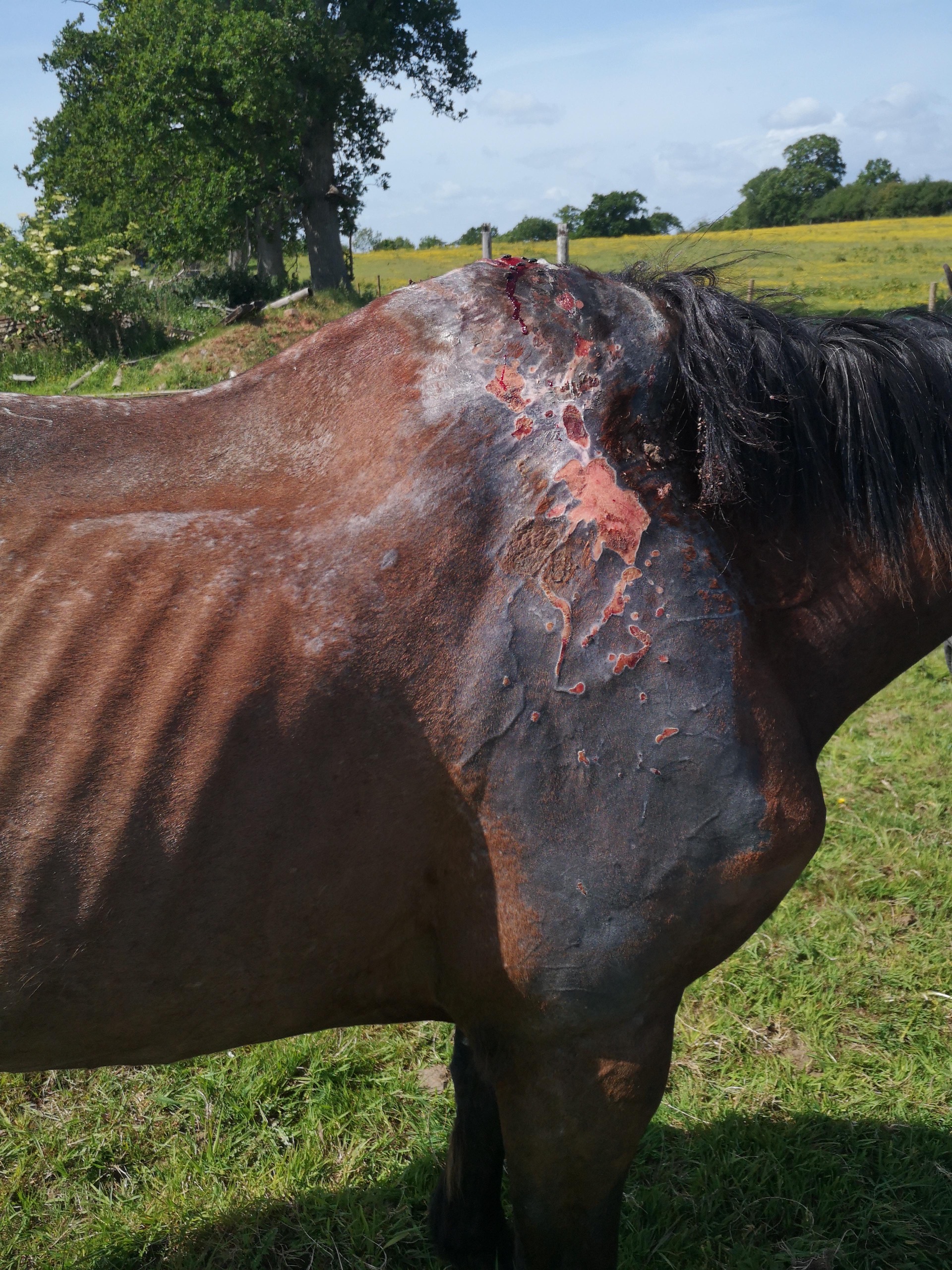 “He is being medicated with antibiotics and has been having his wounds flushed daily and cream applied. When the antibiotics course has finished, the vet will re-assess him, and we will hopefully have a clearer picture regarding his long-term prognosis. Despite all he has been through, he is a very kind, gentle soul who is happy to let us help him.


“The mare and colt have settled in well. There is some concern surrounding the fact that they have been living together and she will be tested for pregnancy along with the usual screenings that HorseWorld’s quarantine process requires. All three horses will need to be brought up to date with their routine care such as hoof trimming, worming, vaccination and dentistry once they have completed their quarantine process and their health allows.”

Syd will remain in HorseWorld’s specialist hospital isolation unit until he is well enough to join the other horses. HorseWorld are currently trying to raise funds towards replacing the worn rubber flooring in the hospital unit which is in urgent need of replacement.

“Having comfortable, safe, hygienic flooring, especially for newly rescued, poorly and malnourished horses like Sid who need to rest and recuperate in peace is vital.” said HorseWorld’s Fundraising Officer, Amy Williams. “We’ve given him a deep bed over the best of the existing rubber mats as with his open wounds he needs a clean, comfortable surface to lie on. 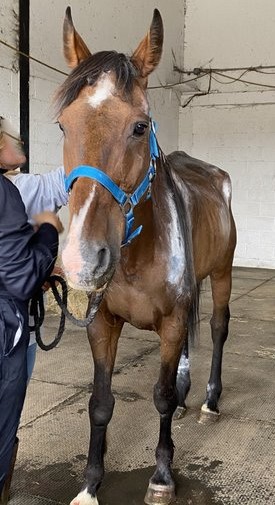 "Being so thin and weak, he will scrape through the bed trying to get up. The existing rubber matting has to be lifted regularly and thoroughly disinfected both sides as the gaps in the worn flooring allow waste to collect underneath. Without careful management, this would be a hazard for a horse recovering from infections so the Grooms have to laboriously lift each one and thoroughly disinfect both sides in order to keep the environment as clean as possible.

"We really need to raise the funds to replace the flooring to help horses like Sid for many years to come. The new flooring will be sealed with no gaps so will be much more suitable for rescued horses with medical problems like this.”

Update; We have now raised enough funds to replace the rubber flooring in the Hospital Isolation Unit, THANK YOU! We are now trying to raise the funds to do the same in the main welfare stable yard where the horses go to continue their rehabilitation once they leave the intensive care of the isolation unit.

You can find out more about this appeal and donate at www.horseworld.org.uk/safe

Thank you for your support!