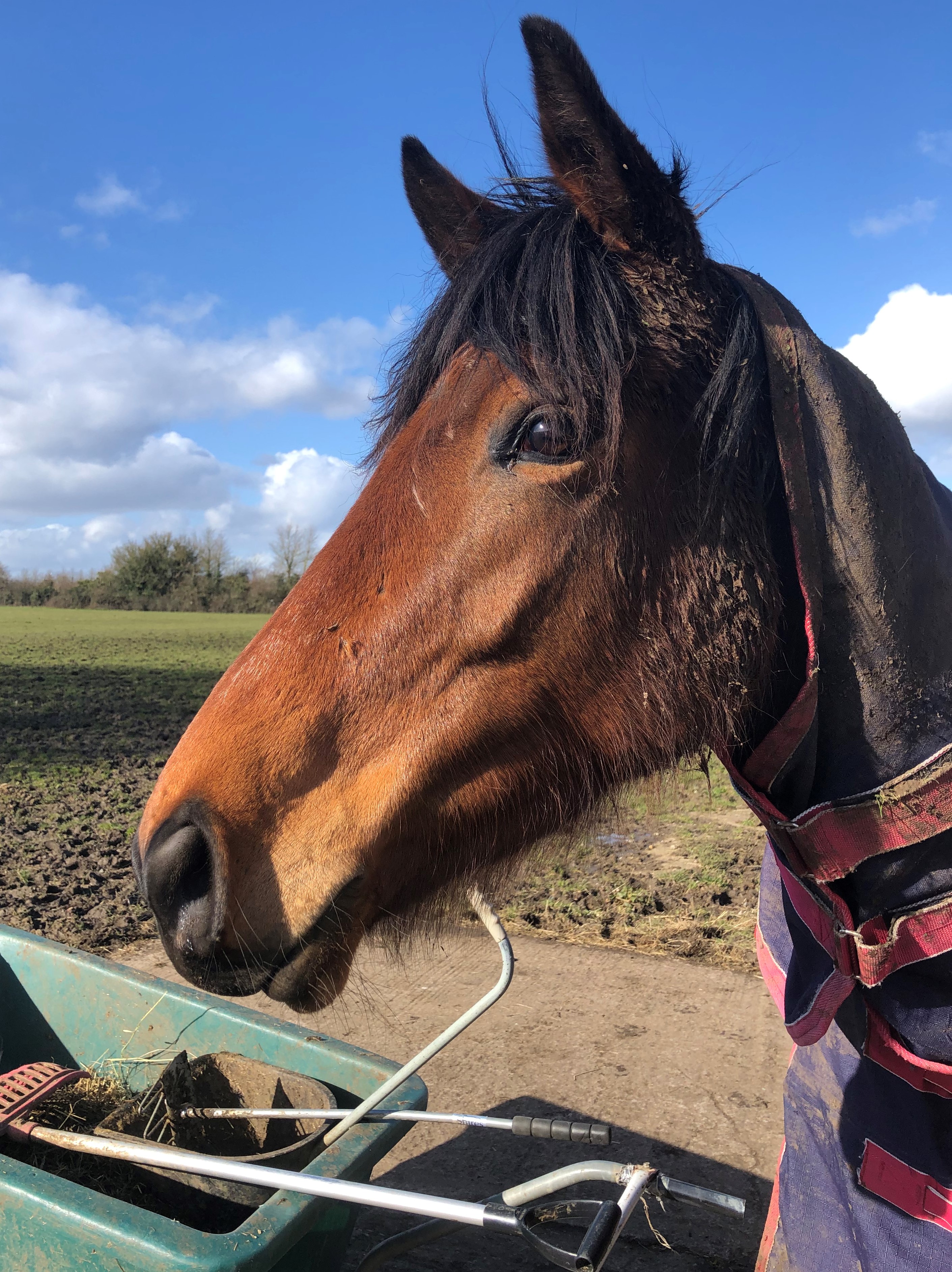 As the the South West’s horseracing fans recover from the excitement of the Cheltenham Festival last week, HorseWorld had to say a sad farewell to an ex-racehorse they’d hoped to save.

Despite the organisation’s best efforts and treatments from veterinary and equine health professionals, Breakfast Time, the young thoroughbred mare was recently put to sleep and the charity believes her story offers a sharp reminder of the sad fate which can befall horses bred for sport who then are deemed not fit for purpose.

The horse was owned by a syndicate but was being retired by her trainer because she was not performing well in races, was too ‘spirited’ when ridden, and was due to be sold; a fate which ran a high likelihood of her being sent for slaughter. (The charity was to discover later that she had very good reasons to not want to run, or be comfortable with a rider on her back.)

Breakfast Time was only three years old when rescued by HorseWorld in September 2019, but had already run in five races.

“We were contacted about Breakfast Time by one of our supporters. Her husband was part of the syndicate who owned the mare. They had become very fond of her and when they heard of the trainer’s reasons for retiring her, became very worried that she would end up being sold for meat,” said Vicky Greenslade, Assistant Yard Manager at HorseWorld.

“Fortunately we were in a position where we could help so we rescued Breakfast Time and brought her to HorseWorld. It quickly became apparent that she was in serious physical and emotional trauma.

“She was incredibly sensitive and her reactions to even the smallest thing, like someone gently grooming her or trying to handle her, were quite explosive; even more than we would normally expect from a horse with her background and breeding. It was clear that this young mare was very troubled,” said Vicky.

As with all new arrivals she was immediately assessed by HorseWorld’s vet who quickly identified that Breakfast Time could have some serious physical issues. She was also checked by the charity’s equine physiotherapist and both agreed that she would benefit from being ‘turned away’, which means being allowed time in a field with fellow horses, to totally relax and with the minimal of human interactions.

But even this had complications for Breakfast Time.

“Turning away should be fairly straightforward, and something that is very pleasurable for the horse,” explains Vicky. “However Breakfast Time was still so anxious from her time living in a racing yard that she couldn’t cope with not being in a strict routine. We had to keep her in a field very close to the yard, and she needed to be brought in every day.”

Over time the mare began to settle and she found a best friend in a horse called Athena. Breakfast Time slowly began to trust the yard team who were taking care of her, and it was them who noticed a sudden deterioration in her health and behaviour.

“Breakfast Time had always been sensitive, but she suddenly couldn’t cope with even the lightest of grooming,” said Vicky. “Even carefully placing a rug on her back made her lash out and become really violent so it was obvious something was very wrong.”

HorseWorld’s vet came a day later to take some x-rays of her back, as the team thought that was probably were the source of her discomfort lay. As a matter of routine horses are usually sedated for x-rays to be taken because the equipment can be alarming for them and it’s essential that they stand still, but it quickly became apparent during the procedure just how much pain Breakfast Time was in.

“My colleague lifted up the special plate which is needed for the x-rays to work properly next to Breakfast Time’s back,” said Vicky. “The horse seemed to think that it might be a saddle being lifted up onto her back and in anticipation of the pain she thought it would cause, flung herself across the stable – despite being sedated. She was obviously terrified and her instinct to get away was far stronger than any medication.”

The x-rays showed the worst possible prognosis for Breakfast Time. She had a ‘Kissing Spine’; a condition where sections of the vertebra which should have space between them to allow pain-free movement develop in such a way that the bones are too close and make contact with their neighbours, causing pain, inflammation and in some cases fusion of the bones.

Sometimes Kissing Spine can be successfully managed and treated, and the horse can go on to live a normal, pain-free life. But Breakfast Time’s case was particularly severe. 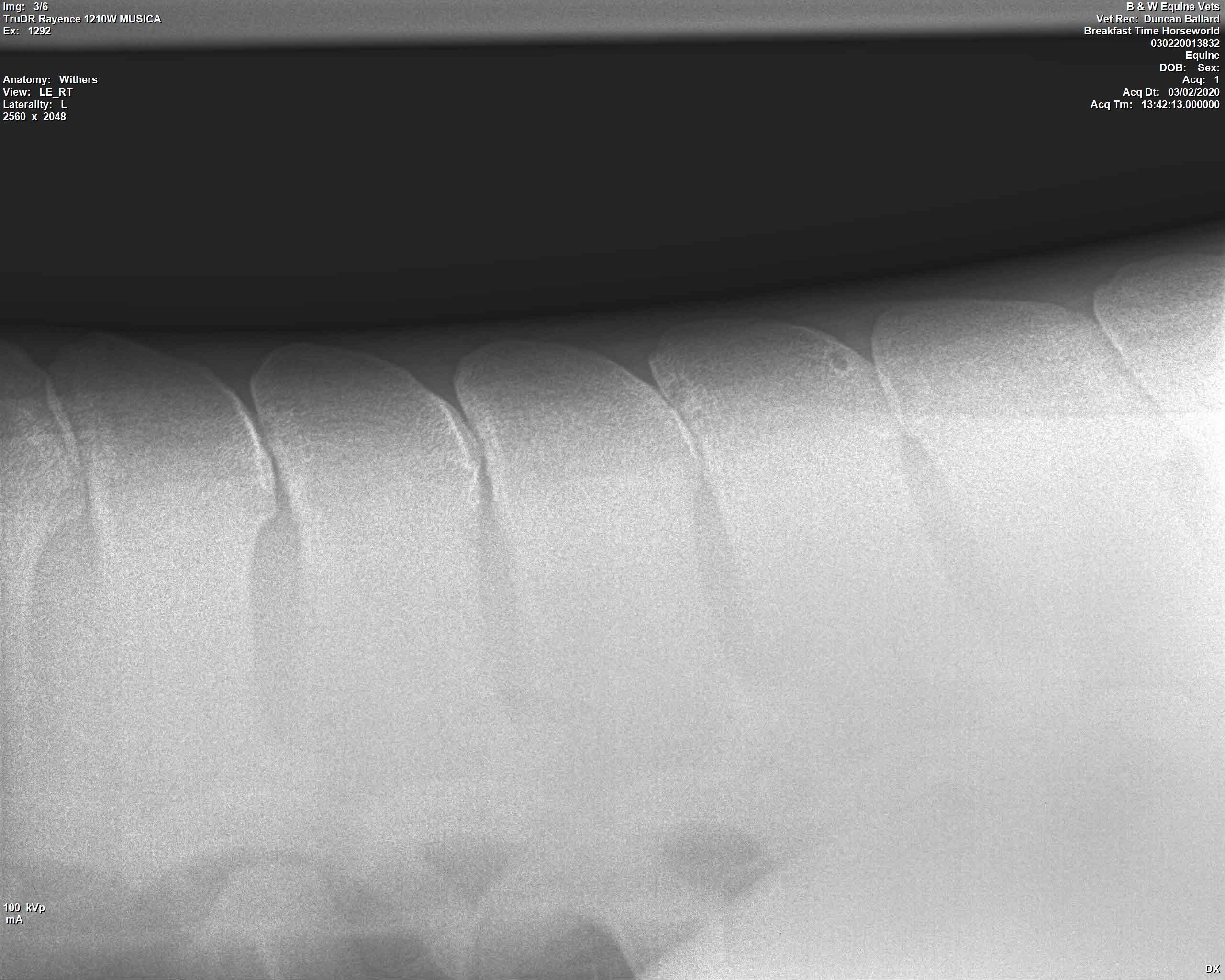 “When we looked at the x-rays we could see eleven different areas where the vertebra were touching – it was almost the whole length of her spine. We can’t be sure what state her condition was when she was being trained, but it’s highly likely that the discomfort she was in would have contributed to her being too ‘spirited’ when ridden. She was probably just showing that she was in pain. The x-rays also seem to show that she fractured her withers at some point - possibly by rearing up and going over on her back,” said Vicky

There’s no way of being certain whether Breakfast Time’s Kissing Spine was as severe when she was in training, or whether being ridden and raced at such a young age would have contributed to its onset and severity. But sadly the one thing that HorseWorld could be certain of was that she was now in too much pain to be able to live a happy and healthy life under any circumstances.

“The severity of her condition meant that operating was out of the question, and the amount of painkillers she would have needed would have been impossible to administer, so after long consultations with our veterinary team we had to make the hard decision for Breakfast Time to be put to sleep. It really was the kindest thing for her,” said Vicky.

“We can’t say for sure that her past caused all her problems, but it definitely didn’t make a positive contribution to her wellbeing. The more she got to trust us the more her personality began to develop. Without her condition, and with patient training from the right person, she could have been a very sweet horse for a loving owner. We are grateful to have been able to ensure her final few months were spent peacefully with the rest of the HorseWorld herd.”

Lolly's surgery appeal seems to have lost momentum with only half the amount raised for her essential surgery. If y… https://t.co/yBm9dAJznd

📣Voting closes at 5pm tonight!📣 Will your favourite win Best in Show? Your vote could make the difference! Go to ou… https://t.co/aWicPmKu94